Should I use Ladder Logic or Structured Text in my PLC Programming? 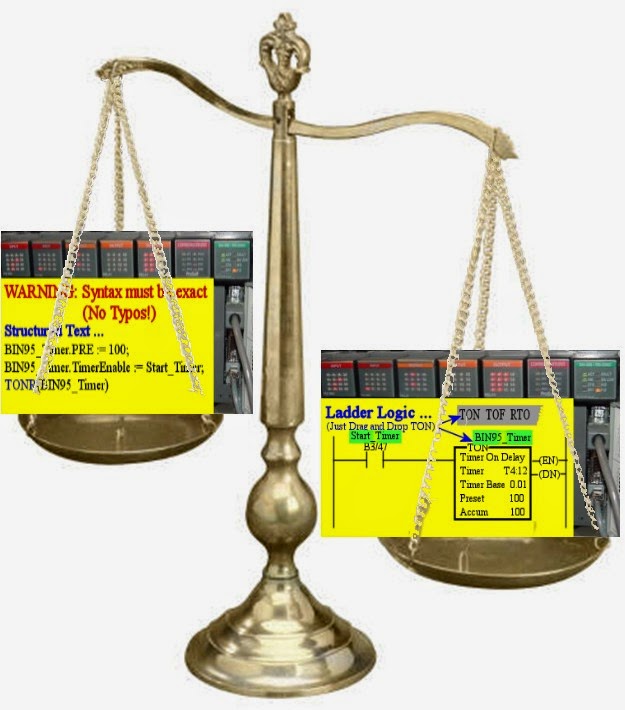 I like to simplify, so I use a arbitrary percentage. 95% of the world uses ladder logic in PLCs. Out of the 5% left, some use structured text. With introduction of PACs about 10 years ago, the 1-3% who are using structured text, is growing.

Just like PACs have a greater life cycle cost to the end user when compared to PLCs, so does using structured text instead of ladder logic. It like Dick Morley (The Father of PLCs) was telling me one day, the more complicated, the less reliable. This statement is not just in reference to the reliability of design, electronics, or even mechanics, it is in reference to Total Ownership Cost (TOC) over the lifetime of equipment. (Increased training cost due to complicity, increased mistakes due to complicity, greater downtime, more complicated to troubleshoot, more calls and wait time for external support, etc. etc.)

The bottom line is a company should weigh the benefits with the TOC for the system lifecycle. Thus the majority use ladder logic.

It is a Technology lesson society has already learned in the past with computers. Back when computer memory and processing speed were limited, we had to use machine language, then moved on to fortran, basic. Eventually memory and processing speed technology advanced enough, we could use a programming language that was more friendly towards human, easier to learn and work with, visual basics.

The same is true with PLCs. The PLC5 was based on an octal numbering system. But eventual memory and processing speed advanced enough, the more human friendly decimal numbering system could be used. Visual is always better for human interaction than numbers and computer code. So if you know a human will have to understand and work with it at some point in the future, make it simple and more user friendly for the widest audience you can.

When I was in school, because of memory/speed limitations, who ever wrote their code the shortest and the quickest won. Now we teach, who ever writes their code the most simple and user friendly wins. Because PLCs now days and especially PACs have more memory/speed than 95% of all applications need. (The other 5% are exceptions to the rule like two high speed machines needing to communicate and react on each other's live data.) To learn more best practices, see PLC Training at BIN95

bin95
Business Industrial Network’s core business is delivering Industrial Training Certificate Courses worldwide for maintenance and engineering. 100% Veteran-owned BIN, started out 20+ years ago specializing in instructor-based live hands-on PLC training on-site and in public PLC Training seminars in the USA. They have maintained an A+ rating with Better Business Bureau since then, and are registered as a Federal Contractor #5BC72. All of the instructor-based courses and some of the 100+ software-based courses used by colleges and corporate training departments around the world, offer CEUs and PDHs credits. Courses are known for focusing on practical application, and software courses are often supplemented with real-world simulation software BIN offers for the hands-on experience too! BIN95.com